A recent Washington Post/Wonkblog article from three weeks ago drove this point home to me.  In it, authors Emily Badger and Christopher Ingraham used 2014 American Community Survey data to identify the housing types of occupied housing units in various cities across the nation.  The graphics (sorry, I can’t embed here; please click the link to view) illustrate the percentages of housing types from single-family homes through buildings with twenty or more units.  Housing is perhaps the chief contributor to perceptions of a city’s development character, and it’s insightful to see how different cities can be from each other.

The detached, single-family home — far and away the most common style of housing in America — is rare in Washington, D.C. Only about one in 10 homes inside the District is designed this way, with a private front door to the city, maybe a yard in the back, some buffer space keeping the neighbors at bay. Windows all the way around!

Instead, we live differently here: with meager lawns (if we have any at all), common stoops, shared walls (or ceilings), and echoes of our neighbors’ dubious TV choices.

The District is a city of row homes and modest apartments, which makes the feel of the place — and your housing options here — significantly different from what you’d find in New York or Chicago or Kansas City…

Half of the occupied housing in Baltimore, in contrast, is in row homes (a whole lot of the unoccupied housing there is, too). Nearly half of the housing in New York is in large apartments. Detroit, a spread-out city now struggling mightily to shrink with grace, has vast stretches of single-family homes on par with newer car-centric cities in the South and West.

These figures tell us not just about the physical character of each city, but the potential they have for new housing as many places (Detroit not withstanding) look for space to fit a growing urban population. Higher density, in all of these cities, doesn’t have to mean Manhattan-style mega-rises.

Scroll down in the article to see the graphic that shows housing types for the nation’s 40 largest cities by population.  They’re organized on a spectrum of housing unit intensity from single-family detached to 20-plus unit structures, and again it’s fascinating to see how different cities are.  A few observations:

The 1-3 housing types that make up 50 percent or more of a city’s housing stock largely define that city’s development character.  The graphic shows that a little more than half of occupied housing in New York is in structures with 10-19 units or 20-plus units, contributing to the general notion of New York as a city of high-rise living.  More than half of the housing units in Philadelphia and Baltimore are single-family attached units — the tens of thousands of rowhouses that have defined them for more than a century.  Many Sun Belt cities, and a few Rust Belt cities (Detroit, Kansas City, Indianapolis) have large numbers of single-family detached homes, and that defines their development character.

A select group of cities have a rather diverse mix of housing types.  Washington, Boston, San Francisco, Chicago and Los Angeles have rather eclectic mixes of single-family detached, single-family attached, two-unit and 3-4-unit buildings, where that grouping of types comprise 50%-60% of all units.  Milwaukee has the largest percentage of two-unit structures of any of the 40 largest cities.  And despite the large number of units in large multifamily buildings in New York, it also has half of its housing stock in far smaller structures.

Housing type diversity may play some role in determining how cities revitalize and who may be attracted to them.  A case could be made that the cities that have the greatest diversity in housing types — New York, Washington, Boston, Chicago, San Francisco, Los Angeles — are the ones that have been in the forefront of urban revitalization and gentrification over the last decade or two.  Diversity of housing types may lead to greater adaptability for cities, and broader appeal as housing preferences change.

The largely Sun Belt cities where single-family detached housing comprises more than half of their housing stock may need to look long and hard at increasing housing diversity to expand their appeal.  Much like businesses have to adapt to consumer preferences, so must cities.  Why?  Once a city loses a market segment because its housing stock is deemed obsolete, it becomes exceedingly difficult to remain attractive.

I’ve made the case for some time now that a significant factor in Detroit’s decline is its abundance of single-family detached homes of a particular type: small, Cape Cod-style or bungalow-style homes like this: 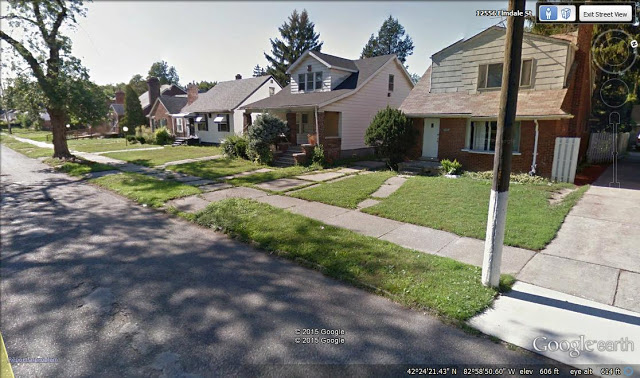 that are easily abandoned once housing preferences change.  They have a very short shelf life.

There have been substantial changes in family formation and household formation over the last 50-60 years, and they’ve led to huge changes in housing preferences that cities have been slow to adapt to.  Household sizes are getting smaller, but the desire for space has increased.  Traditional two-parent households don’t dominate the housing market anymore.  Single person or single-parent households are increasing in numbers.  The elderly are increasing in numbers, who may own homes now but are increasingly looking to move to smaller and more adaptable spaces.

How quickly can cities make the policy changes necessary to maneuver in a new demographic environment?

Cities that find themselves dominated by a development type meant to serve yesterday’s economy would do well to modernize their development character.  It can help them maintain, or even broaden, their market appeal.