(Note: This was originally posted at Forbes on December 22, 2016, with a few visual additions for explanation and clarity.  -Pete)

A recent article at the Atlantic’s CityLab website brought this to light. The article detailed an interactive project by mapping software company Esri called “Wealth Divides”, which highlights stark median household income differences by census tract in five cities — New York, San Francisco, Washington, DC, Boston and Atlanta. The project calls attention to two ideas that capture the imagination of many in cities today: 1) the middle class is in rapid retreat nationwide, and 2) rich and poor can coexist right next to each other and live vastly different lives. The maps provided in the series illustrate those points and confirms what many of us know already.

But aren’t the way cities look today, physically as well as socially and economically, the result of long ago decisions? Yes, the middle class has been in decline for more than a generation, but isn’t it true that the geography of most rich and poor neighborhoods was established decades ago, and we’re just playing out the string?

Here’s the thinking. The migration of the middle class from city to suburb has been well understood and documented in American cities for nearly a century. The back-to-the-city phenomenon, however, is of more recent vintage and has roots that are less well understood. As with so much about our modern understanding of cities, Jane Jacobs’ description of her Greenwich Village neighborhood in Manhattan informs us of how cities can transform themselves and provides a sense of how wealth takes root, coalesces and spreads in cities.

As growing numbers of people seek to relocate to cities, they seek out places that are secure, comfortable, and with the amenities they enjoy. Whether young adults seeking the vibrancy of city neighborhoods with a wealth of entertainment amenities, or empty nesters looking to downsize from large suburban houses, their decisions reflect not only their thinking about the urban landscape, but impact future decisions made by future potential residents, transportation agencies, real estate developers and city government. New norms for how wealth moves into cities are developed; new paths for how wealth spreads emerge.

In the decades immediately following World War II, as suburbanization spread and wealth fled cities, a handful of city neighborhoods were able to hold on. Some did so because of their location next to an outstanding local institution, like a university or hospital, or because of excellent public transportation access, or because of commercial and cultural amenities, or the quality of their homes, or the activism of the residents. Whatever the reason, these neighborhoods became the foundation from which future neighborhood revitalization sprung in cities, and more importantly, either established or confirmed the pattern by which wealth would spread in cities. The phenomenon known as gentrification took root in these core neighborhoods and spread outward in different ways, depending on the city and its unique geographic and social history.

I see four ways that wealth spreads in our new back-to-the-city reality, with each having an impact on the scale and depth of the gentrification process in cities.

Inside-Out. Cities that spread wealth with this approach start from a core neighborhood and see gentrification radiate outward in all directions. It typically starts within a neighborhood close to a revitalizing downtown, following public transit networks. New York is perhaps the best example, with gentrification starting in lower Manhattan in the ’60s and consistently moving outward from that starting point. Two other cities with much more recent gentrification activity, Baltimore and Detroit, demonstrate similar patterns.
Using New York as a visual example, inside-out gentrification might look like this, starting in lower Manhattan and radiating outward:

Array. Similar to cities utilizing the inside-out approach, gentrification starts within a core neighborhood and spreads outward. But instead of radiating outward more or less equally in all directions, it extends outward in one or two directions. Chicago may be the best example of this approach, with gentrification activity steadily moving from the city’s near north side gentrification core to the north and northwest. Philadelphia may follow a similar pattern.

Here’s how I envision the array approach in Chicago: 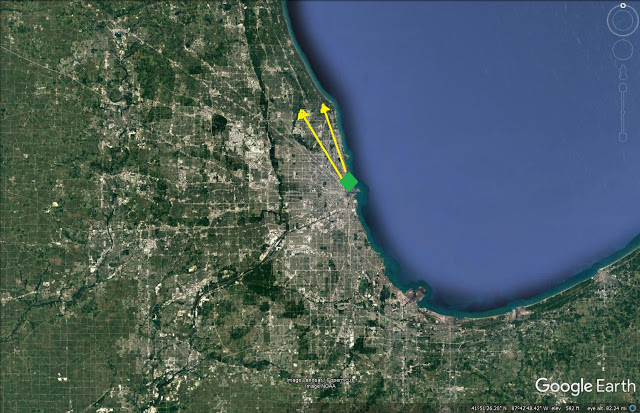 Divided. In other cities, a historical geographic divide may play a role in how wealth continues to spread today. Here, one side of a city may have historically held more wealth than another, and recent gentrification activity simply follows the pattern. The divide may be rooted in historical low-ground/high-ground patterns within a city, but now are imbued with social and cultural significance that outweigh physical characteristics. Washington, DC comes to mind here, which has had a historical east-west divide in terms of wealth that has only been breached in the last decade. Atlanta’s strong north-south orientation seems to fit as well.

Here’s how the DC east-west divided approach might look:

Scattershot. Because of the unique geography of a city, gentrification activity may take root in numerous spots and spreads in multiple ways. The Bay Area may offer the best example of this. San Francisco’s hilly topography likely put a premium on locations that would offer excellent views of the bay, the ocean, or downtown, meaning that wealthy newcomers may have many location choices. The public transit network further enhances the scattershot approach. On the other side of the bay, Oakland has long demonstrated a lowland/hillside split, with higher income residents occupying hillside locations and lower income residents occupying lowland areas near the bay.

Scattershot gentrification in the Bay Area might start at several points and push outward, like in this fashion (my best guess; I’ve never been to the Bay Area): 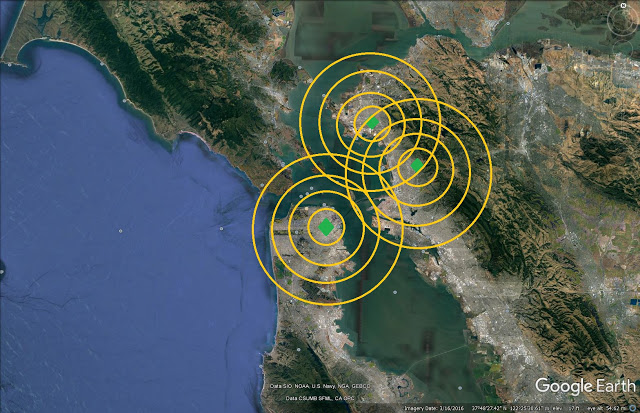 Why is this in any way meaningful? The gentrification pattern in cities provokes different responses from residents and policymakers. Residents of cities exhibiting an inside-out or scattershot approach may see what appears to be gentrification’s inexorable march outward, or its sudden appearance in a new area, and may view their city as being consumed, and may develop a set of policy responses that address their unique patterns of expansion. Those in cities demonstrating an array or divided approach may see that gentrification is not touching all parts of a city, and may consider other policy options.